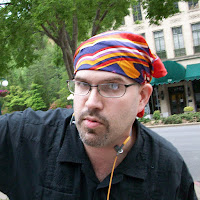 According to a report by Joel Currier published earlier today by STLtoday.com, Schafer "went in Creve Coeur Park at lunchtime Wednesday to play his saxophone, police say. He carried it in a case, approached a group of people and told them he had a bomb hidden in his sax case."

"The people got scared, police said. They called 911. Maryland Heights officers arrived, found Schafer tooting his horn in the park and arrested him."

"He admitted telling people about a bomb in the sax case, but claimed he was simply touting his saxophone skills, court documents say. Nonetheless, St. Louis County prosecutors charged him Thursday with making a false bomb threat. Maryland Heights police took Schafer to jail, where he is being held on a $25,000 bail."

An online bio says Schafer is a graduate of the University of Missouri and Maryville University, and a search shows he's played with some reasonably well-known local groups including the Brian Sullivan Quartet, the Pat Sajak Assassins, and several others. Known in some online fora as "jazzresin," he's studied to be a music therapist and has been around the St. Louis scene long enough to have made jazz historian and DJ Dennis Owsley's honor roll of notable local musicians.

Add it all up, and Schafer sounds not like a legitimate threat to public safety, but rather someone who made a bad joke and then possibly got stupid with a cop. Not something to be encouraged or applauded, certainly, but not something that merits a disproportionate use of scarce local law enforcement, correctional and court resources, either. Here's hoping the County prosecutor will reconsider at first opportunity and adjust the charge and bond to something more appropriate, or drop them entirely.

In the wake of the recent bombing in Boston, a certain amount of caution is understandable, but in this case, do you think the authorities in Maryland Heights and St. Louis County are over-reacting? You can weigh in with your comments below, and in the meantime, StLJN will be following further developments in this story.